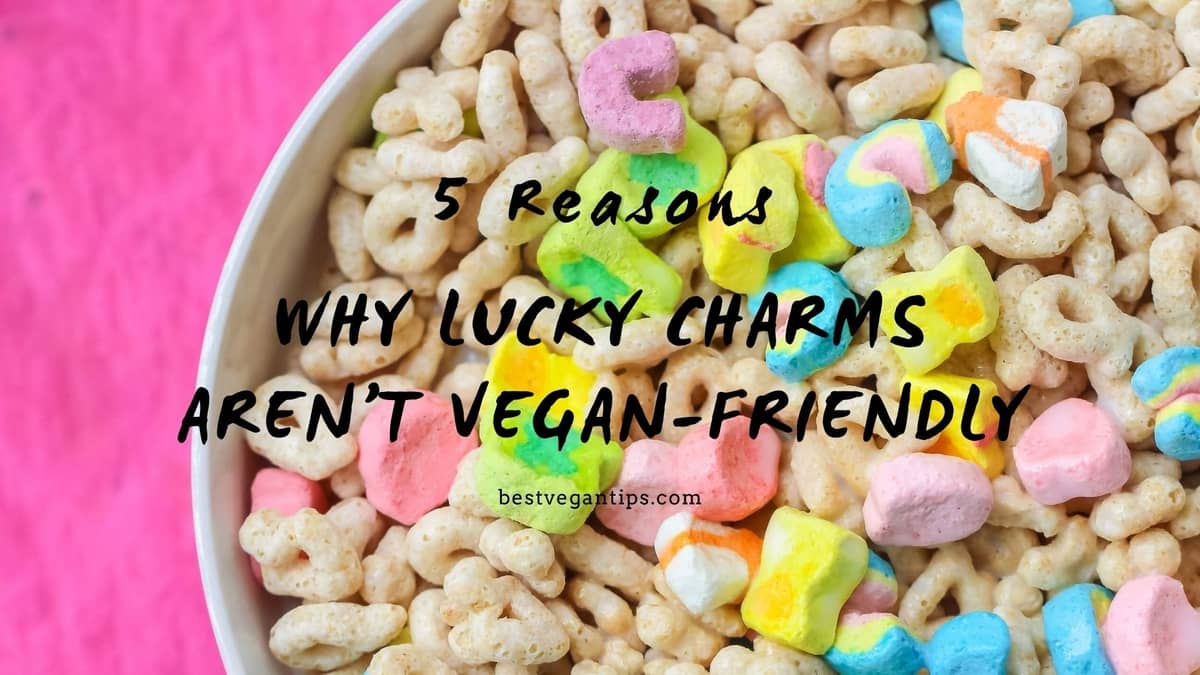 Walking down the cereal aisle, it’s hard not to notice all the brightly colored and fun-shaped cereals. Eating a vegan diet makes finding a breakfast cereal harder, despite the eye-catching packaging and inviting cereal mascots. Many of my favorite childhood cereals, like Lucky Charms, are no longer charming – and they definitely aren’t vegan, either.

What Are Lucky Charms?

Attention-grabbing in that bright red box, this breakfast cereal with frosted oats and rainbow marshmallows was first created in 1964. You may also recognize Lucky the Leprechaun, the Lucky Charms official mascot. This classic breakfast cereal has been around for decades, cherished by all ages and many generations.

Breakfast cereals have a reputation for falling on the unhealthy end of the breakfast spectrum. When it comes to added sugars and low-quality ingredients, some cereals are better than others. Looking into the nutrition facts and ingredients list is the best way to determine if Lucky Charms are healthy. 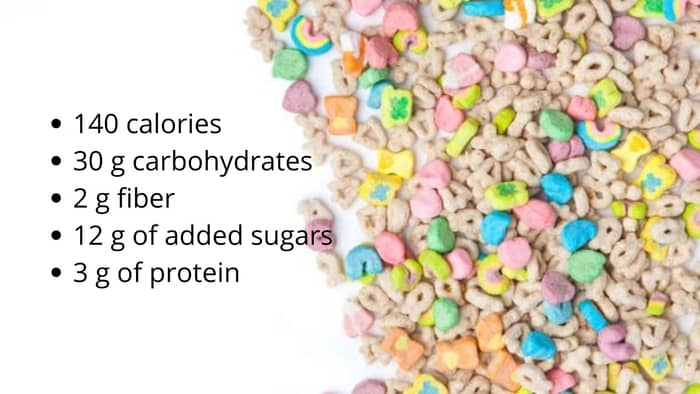 Known for being a flavorful breakfast cereal, Lucky Charms’ nutrition is worth looking at. Per serving without milk, a bowl of the Original Lucky Charms is 140 calories, 30 g carbohydrates, 2 g fiber, and 12 g of added sugars. Additionally, there is only 3 g of protein per serving.

Added sugars is the most important part to note here. The 2020-2025 Dietary Guidelines for Americans recommend limiting added sugars in your diet. If you’re eating 2,000 calories a day, you shouldn’t get more than 50 g of added sugar per day. One bowl of Lucky Charms is about ¼ the amount of daily added sugars recommendations.

For kids,, less than 24 g added sugars should be eaten per day. One serving of Lucky Charms is half of the added sugars children should have daily. That’s a lot!

When planning for a healthy breakfast, it’s key to include enough protein and fiber. Adding these to any meal will keep you fuller for longer and slows the breakdown of sugars. Lucky Charms alone has small amounts of protein and fiber.

General Mill’s Original Lucky Charms currently have 16 different ingredients and additives on its ingredients list, not including the added vitamins and minerals.

Known to be “magically delicious”, however, the Lucky Charms ingredients list isn’t exactly magical. There are a couple things to remember about ingredients lists. The label must include things like colors and additives, specifically those that are FDA-certified. However, it can group other ingredients that are similar under an umbrella term, like “spices” or “natural flavor”.

If you’re familiar with non-vegan ingredients in food, you probably saw a couple red flags when reading through the ingredients list.

The most obvious vegan offender here is gelatin, a component of those colorful, bite-size marshmallows. Gelatin is made from animal cartilage in foods like marshmallows and candy gummies. Unless you’re taking the charms out of Lucky Charms, this cereal is not vegan due to this ingredient.

The second ingredient in Lucky Charms is sugar. Since they don’t specify, there’s a good chance Lucky Charms doesn’t use an organic sugar, making it not vegan friendly. Refined cane sugar is processed using bone char, which is an animal byproduct and a no-no for some vegans.

Not all vitamins are vegan-friendly, especially Vitamin D3. This vitamin usually comes from lanolin, or sheep’s wool, and is not vegan. Using an animal byproduct is to fortify vitamin D is typically inexpensive for food companies and is common in processed foods.

Some vegans are okay with fortified vitamin D in their diets, especially since it’s one of those nutrients we all could use a boost in. Sometimes, foods are fortified with vitamin D2, a vegan source of vitamin D. These products may be labeled ‘vegan-friendly’ or ‘plant-based’ but read the ingredients to be sure.

More mysterious than magical, natural flavors are anything that is approved for use in food – vegan or not. Using these ingredients makes a vegan unable to know if a food is okay for them to eat. These ingredients come from parts of herbs, produce, meat, and everything in between.

There is one commonly used food dye that is not vegan-friendly. Carmine, a red dye, is made from cochineal beetles. Even though it isn’t in Lucky Charms, keep an eye out for this coloring agent in food as well as beauty products.

Lucky Charms can be a nostalgic breakfast cereal or snack, and it’s hard to replace that. Unfortunately, there aren’t any similar vegan versions of Lucky Charms. To create your own vegan Lucky Charms, find a vegan-friendly oat cereal and vegan marshmallows to mix together.

Lucky Charms are not vegan due to the several non-vegan ingredients. The Lucky Charms nutrition and ingredients aren’t exactly the healthiest, with high amounts of added sugar. There aren’t any vegan Lucky Charms out there, but you can create your own with vegan cereal and marshmallows!