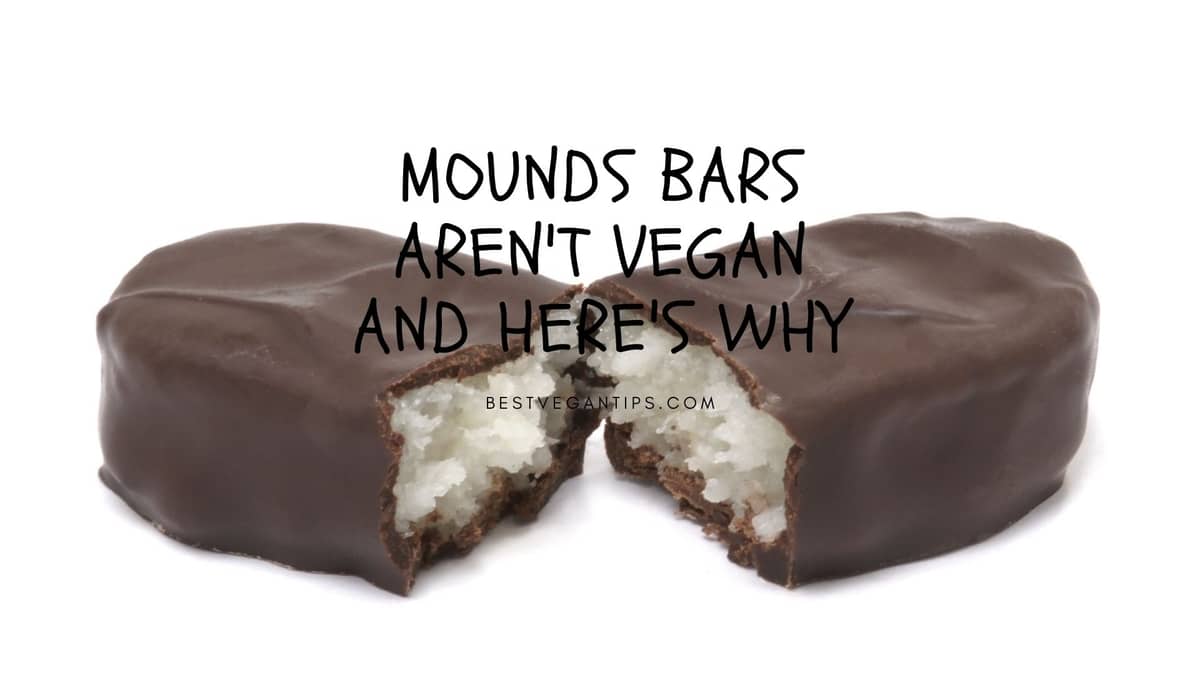 Made with coconut and dark chocolate, a Mounds bar may initially seem to be vegan-friendly. When this candy bar comes to mind, you may be wondering ‘are Mounds vegan?’. We’re looking at the Mounds ingredients and highlighting some vegan-friendly alternatives.

Shaped like their name, Mound bar candies are mounds of sweetened coconut covered in dark chocolate. Their nearly identical counterpart, Almond Joy, is covered in milk chocolate and features an almond on top. Both are classic American candies, well known by coconut lovers.

This candy was created in 1919 by Peter Halajian, who would sell candies and sweets locally. During World War II, the shortage of coconut and sugar caused Peter to only produce Mounds over his other treats. In 1988, Mounds and Almond Joy officially joined The Hershey Company.

While there is only one flavor of Mounds candy, there are a few different varieties to choose from. Between the original 1.75 oz candy bar, there are also king and snack sizes. It’s up to you if you want to share!

How To Enjoy Mounds

Obviously, Mounds are delicious straight out of the wrapper. Have you ever thought about baking with Mounds bars? Here are a few other popular ways fans are enjoying Mounds:

For one of the regular-sized candy bars, there are 230 calories, 13 g fat, and 29 carbohydrates. There are also 2 g protein and 3 g fiber per serving.

Despite being made with dark chocolate and shredded coconut, Mounds are not vegan. The semi-sweet dark chocolate itself contains milk, in addition to the hydrolyzed milk protein.

Shorter than most candy ingredient lists, Mounds ingredients can be found online or on the back of the wrapper. Reading an ingredients list is the best way to tell if a packaged food is vegan.

Most dark chocolates do not contain any milk, usually making them a reliable vegan option. Despite being labeled as dark chocolate, Mounds chocolate contains cow’s milk. This is the biggest reason Mounds are not vegan.

When it comes to chocolate, there are a few ethical components to factor in, as well. The chocolate industry is notorious for issues like slavery, child labor, and human trafficking – which vegans typically do not stand behind. Hershey’s, as well as other large candy companies, have been under the spotlight for not ethically sourcing their chocolate.

In 2018, Hershey’s launched Cocoa For Good,  with goals to help “nourish children, empower youth, build prosperous communities and preserve natural ecosystems” by 2030. While it all sounds great, that doesn’t give Hershey’s a clean slate because they still use some child labor and non-ethical cocoa. If human rights and ethical practices play a role in how you shop, I would skip Hershey’s products.

Being a candy bar, there will undoubtedly be sugar on the ingredients list. Refined cane sugar is not made with animal products, but it is processed using animal bone char. Depending on the way you define vegan, you may allow this byproduct in your diet.

Hershey’s does offer some of their chocolate bars as organic. However, it doesn’t include Mounds and most of those varieties still include milk in the ingredients, making them not vegan friendly. Unrefined sugars include an organic cane, beet, coconut sugar, and raw sugar are all vegan.

Yes, Mounds are gluten-free. The ingredients list is free from wheat and other sources of gluten. Additionally, Hershey’s website confirms that this candy is gluten-free.

Even though Mounds aren’t, coconut and dark chocolate are an iconic duo that can be vegan! Here are four vegan-friendly Mounds bar alternatives:

These vegan Mound-like candies are sweet, creamy, and organic. The coconut at the center is covered in rich organic dark chocolate. Ocho makes small-batch goodies that are certified fair trade, gluten-free and vegan.

The Certified Vegan Logo can be hard to come by on candies, but it’s the tried and true way to know an item is genuinely vegan. This means that the item has been tested by a third party, Vegan Action. Unlike Mounds, there are no animal products or by-products in these coconut dark chocolate candies.

Paleo vegans, look no further! Think of this option as a cross between Mounds and a peanut butter cup. USDA Organic, vegan, and Rainforest Alliance Certified, these dark chocolate coconut candies come in the form of a cup.

If you’re looking for a well-rounded snack option, this one’s for you. Vegan, gluten-free, and Non-GMO Project Verified, these bars are made with real dark chocolate, almond butter, and moist macaroon-style coconut. Besides, what’s not to love about 100 calories?

When in doubt, make it yourself! Mounds ingredients are simple and easy to find. Get creative in the kitchen by making your own version of these delicious treats.

Vegan Candy – What You Need to Know

Even though Mounds candy aren’t vegan, there are still plenty of vegan ways to satisfy your sweet tooth. From healthy candy alternatives to PETA-approved “accidentally vegan” traditional candies, be sure to check out the complete guide to what candy vegans can eat.

The dark chocolate coconut is an irresistible duo. Mounds may not be vegan, but there are quite a few vegan alternatives that can satisfy your craving. Comment which coconut dark chocolate bar has your mouth watering the most!